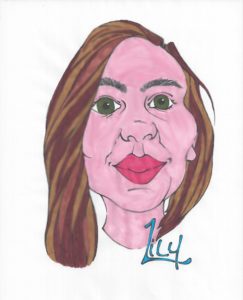 It was just a normal day at school, when suddenly something happened.

I was on my way to PE, when I saw smoke coming from the city. So, I asked to go to the bathroom, and as soon as possible, I changed into my super suit and I went to go see what was happening. I ran towards the smoke as fast as I could, when I saw someone. It was Volare!

He can fly and has super strength. I can turn into a wolf. We got to where we saw the smoke, and there stood Ekidona. He has a staff that gives him the power of strength. He had robbed a bank with his three minions and set the place on fire. We quickly put out the fire and got everyone to a safe place, and then we went to catch him. Volare said

“I'll take Ekidona and you take the minions!” I agreed.

So, I ran to the minions and took them out. I tied all three to a post and ran over to help Volare. Finally, I found them fighting in an alley.

“If his powers come from his staff than all we have to do is break it!” I thought.

Ekidona grabbed Volare and threw him towards me. I helped him up and told him.

“You grab him and pin him, and then I'll break the staff!” He agreed.

He ran up to Ekidona and started trying to grab him. Volare finally got Ekidona on the ground and grabbed the staff. I ran towards them and he threw it towards me. I caught it and smashed it on the brick walls.

“Now that Ekidona doesn't have powers, it will be easier to stop him!” Volare said. We took him and his three minions to the police station. The police locked him up. I rushed back to the school and could not get in. I looked over and saw someone, It was Adrien, my classmate.

We both nodded. I looked at my watch, and it was 5 pm!

I heard someone cry for help, so I hid behind a corner and transformed into Okami. Adrien had seen me. So, he ran behind a wall and transformed into Volare. He followed me as I ran to where I heard the call. I found the people who were calling for help. They had a cat stuck in a tree. I climbed into the tree and got the cat. I was on my way home as Okami when I saw Sora. He landed next to me and asked me where I was going.

“Oh Volare, you know I can't tell you! No one can know our identities!” I said

“Well ok, but I need to tell you something!” He said.

We went into a building where there was no one.

“What are we doing here?” I asked.

He turned to look at me.

“I have to go now, but why don't we meet here tomorrow night at this time?”

We both went home.

Follow us to stay informed of new publications and events!